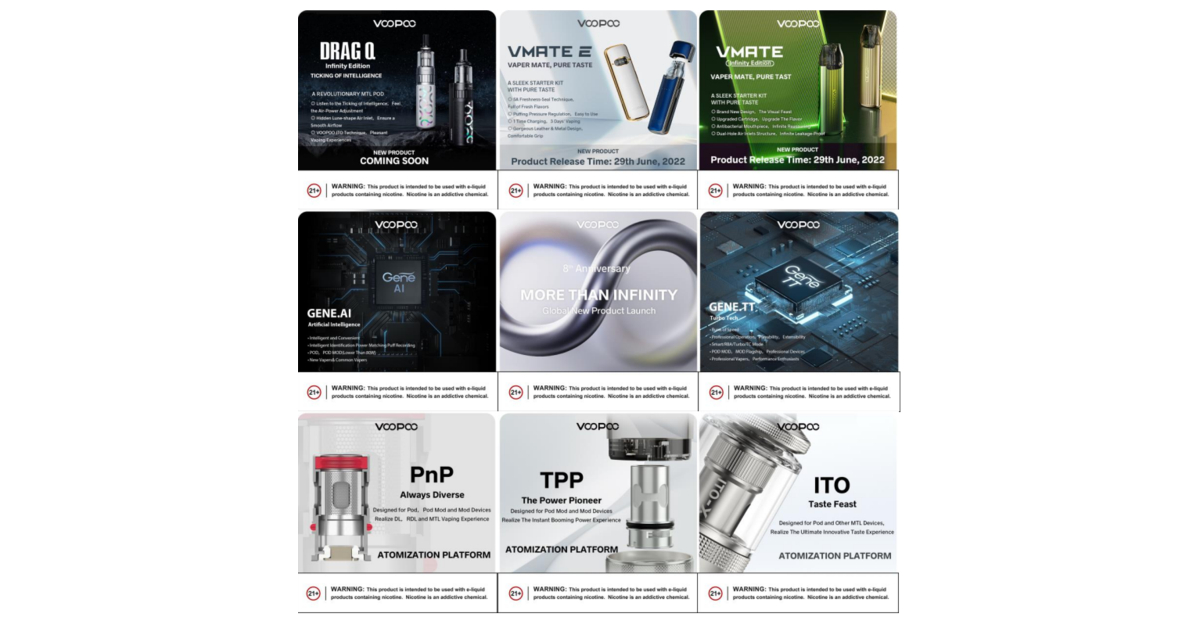 SHENZHEN, China–(BUSINESS WIRE)–VOOPOO’s 2022 “More Than Infinity” virtual product launch was held on June 29, 2022, where VOOPOO took 30 minutes to review its brand story during the past 8 years since its founding, expounding the connection between the “infinity symbol” and the brand spirit and demonstrating its commitment to creating infinite new possibilities using technology in 3 chapters. Meanwhile, the event was highlighted by 3 POD products featuring VOOPOO’s most cutting-edge technology.

A very important theme at the virtual event was telling the growth story of VOOPOO since its founding 8 years ago. Evolving from an atomization chip solution provider to today’s industry leader of open electronic atomization, VOOPOO has driven the positive development of the industry through a series of disruptive innovations while undergoing its own brand metamorphosis. In addition, since VOOPOO started the globalization strategy last year, it has opened branches in the United States, the United Kingdom, Indonesia, Germany, France, Canada, and Malaysia, and will open more in the future to strengthen localized operation in the local market. VOOPOO has also insisted on strengthening its global influence in the global electronic atomization field by setting up brand flagship stores and launching APPs in more regions.

As another essential part of the event, VOOPOO released the three latest Pod products, of which two V-series products, namely VMATE E and VMATE Infinity Edition, were unveiled for the first time. Both products are equipped with the newly upgraded cartomizer, using the 5A freshness seal technology to lock the fresh taste and aroma of the e-liquid, while the Fresnel lens texture design can effectively reduce the e-liquid’s exposure to light, preserving the fresh taste for users. The material of the cartridge is specially added with silver ions with 99%+ effective antibacterial performance.

The third product Drag Q which was previously released came back with a new CMF Infinity Edition. As a POD product, Drag Q has subverted the industry’s understanding of POD products with its expert-level performance in intelligent pressure control and taste restoration. At the virtual launch, the VOOPOO global brand ambassador also explained in detail the core drive of VOOPOO’s leapfrog development, i.e., the investment in “user-centered” R&D. So far, VOOPOO has launched three pioneering atomization platforms catering to different users — PNP, TPP, ITO, and has developed two GENE chips for different product functions — GENE AI and GENE TT. It is with the continuous optimization and innovation in atomization technology that VOOPOO wins trust and support of consumers.

The last chapter was dedicated to the customers and millions of fans who marched forward hand in hand with VOOPOO. In the past 8 years, VOOPOO has cooperated closely with more than 100,000 offline outlets, and has won more and more consumers with high-quality products and continuous market investment. Its market achievements are the evidence of mutual benefit and win-win cooperation with partners. On a global scale, more than 50 million users have become loyal fans of VOOPOO. They not only spur VOOPOO to continue to create products that are ahead of the times but also become part of the electronic atomization culture in the VOOPOO ecosystem. VOOPOO announced that the first flagship stores, being part of the VOOPOO ecosystem, will open in the UK and Indonesia for close interaction with VOOPOO fans.

VOOPOO took 30 minutes to demonstrate the connection between VOOPOO’s development strategy, innovative spirit, brand culture and the infinity symbol, while the 3 newly launched products will be worthy of the expectations of the market and the industry.

VOOPOO is a leading brand of open pod system and has rapidly risen through DRAG products, which have been widely acclaimed globally in a short period of time. VOOPOO focuses on building two core technology platforms of [Chip] and [Atomization]. VOOPOO has creatively developed GENE.AI, GENE.TT and other chips. In addition, VOOPOO independently developed three Atomization Platforms, which are TPP,PNP,ITO, aiming at differentiated users. VOOPOO has four major product series – ARGUS, DRAG, VINCI, and V-series(Doric). VOOPOO will continue to develop more national markets in the future, aiming to build one of the most influential global brands.

The original source-language text of this announcement is the official, authoritative version. Translations are provided as an accommodation only, and should be cross-referenced with the source-language text, which is the only version of the text intended to have legal effect.