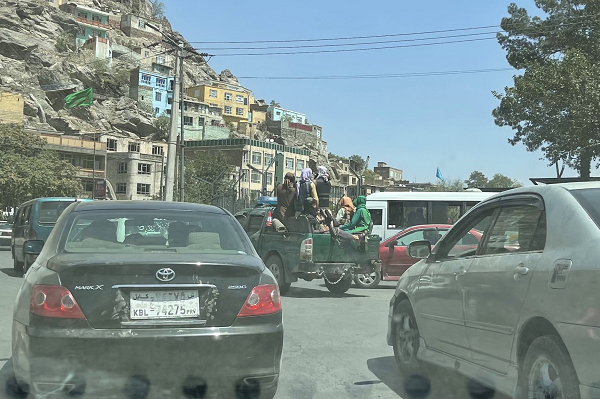 A Londoner who is stranded in Kabul, Afghanistan has said that the Taliban shot their way in to his family home and then kidnapped his sister at gun point.

Khaleed who is a father of two said the Taliban opened fire at his front door as they forced their way in.

Khaleed told the Metro.co.uk he and his family are now in hiding and fearful for their lives.

He said, “I’m pleading with the British Government to show some mercy and do something to save us, our lives are in danger.

“Please don’t leave us at the mercy of these animals, the whole world has seen their cruelty. Just help us to get out of this country because they can come and take us away whenever they want to.

“I don’t know what to do, where to go, there is no help from the British Government. I’m pleading with the Government, do something to save us.”

Khaleed left London just over two weeks ago as he was concerned for his family who are Afghan nationals.

“It’s very dangerous, if you’re British or American they see you as a spy and an infidel.

“The Taliban came to my house after we left to search for me and I have found out from neighbours that they shot bullets at the walls and door to break the door down and get inside the house.

“They put a black cloth over my sister and took her away. I’ve called her a hundred times but her phone is switched off.”

He continued, “I took my family to the airport every day and I almost lost my two kids because of the heat and the crowds.

“One of the times I went we were 10 or 15 minutes away from where the suicide attack took place.

“We would wait for hours and hours with the kids but every time we got close to the gates something happened, the Taliban would come with sticks or wires and chase everyone away. It was just too much for the kids.

“The last time I got to the airport I spoke to one of the soldiers. He checked my passport and told me to go home and I would receive an email telling me where to go and where I would be picked up.

“When I went back home I found out in the next couple of hours that the British had left Afghanistan and that there was no help and no more flights.

“We can’t do anything and we are running out of milk for the kids.

Former Army veteran and Tory MP Tom Tugendhat warned on Wednesday the Taliban are using biometric information which was left behind in Afghanistan to find those who worked for Afghan intelligence and the security services.

He told Good Morning Britain that the Taliban are “rounding up people” and “hunting them down in Kabul and killing them.”

Tugendhat, the chair of the Foreign Affairs Select Committee said, “What we are seeing is a slick PR operation masking a vicious death cult.”