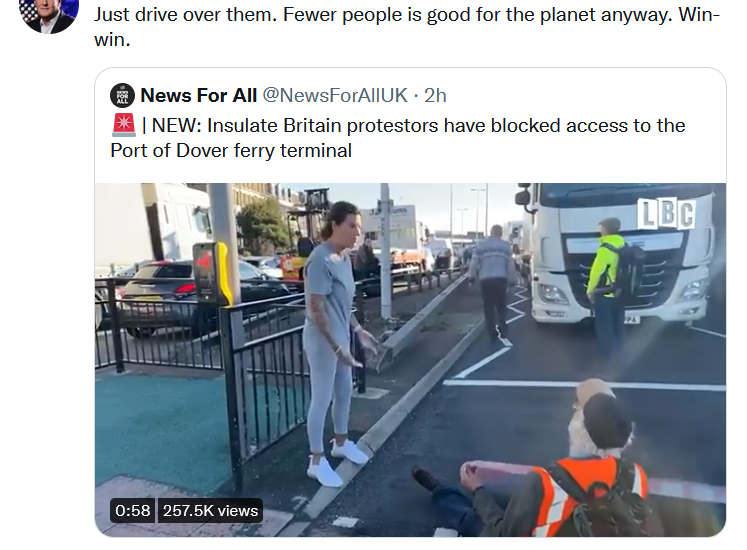 Piers Morgan has sparked controversy as he tweeted that drivers should “just drive over them” protestors who are blocking the Port of Dover.

Around 40 protestors from Insulate Britain, an off-shoot of Extinction Rebellion are sitting on the tarmac holding up banners blocking the A20 road in Kent at the Eastern Docks roundabout.

Police have arrested 17 protestors this morning as hundreds of vehicles are being blocked.

Insulate Britain – politely asked to move by police or they’d be arrested. Gently removed as 17 are arrested

Demo at Dover against illegal immigration – police in riot gear violently arrest people while digging them one or hitting them with batons pic.twitter.com/aIePpJR1co

Morgan tweeted, “Just drive over them.

“Fewer people is good for the planet anyway. Win-win.” 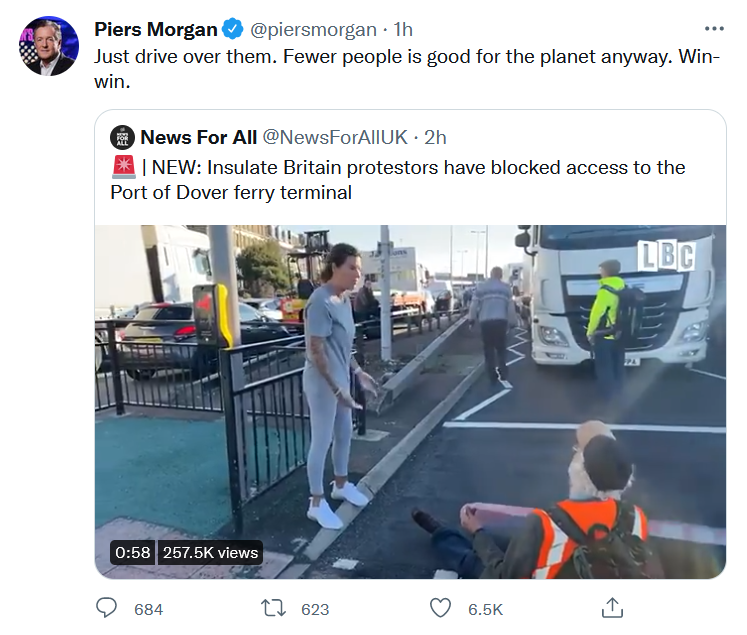 A motorist told Sky News, “I’m knackered, a nine-hour drive, I’ve travelled from Strasbourg, going to Cambridge now, and seeing this is just doing my head in.”

Another driver said, “I do understand people wanting to protest, but they seriously need to think about the bigger picture.”

“You’re losing the cause… I would have supported you”

Members of the public turn on Insulate Britain protesters who are blocking access to the Port of Dover ferry terminal.

In a statement, Insulate Britain said, “This morning over 40 people that have been involved in Insulate Britain’s 10 days of motorway protests blocked Europe’s busiest ferry port, the Port of Dover.

“Two groups have blocked the A20 at the Eastern Docks roundabout and near the junction with Union Street for the Western Docks.”

The Port of Dover has warned travellers to prepare for potential delays and allow plenty of time for their journey.

A spokesperson said, “Protesters are currently blocking the entrance to the Port. Kent Police are on the scene.

‘Allow plenty of time for your journey and check with your ferry operator for updates. The port remains open but the entrance is blocked.”