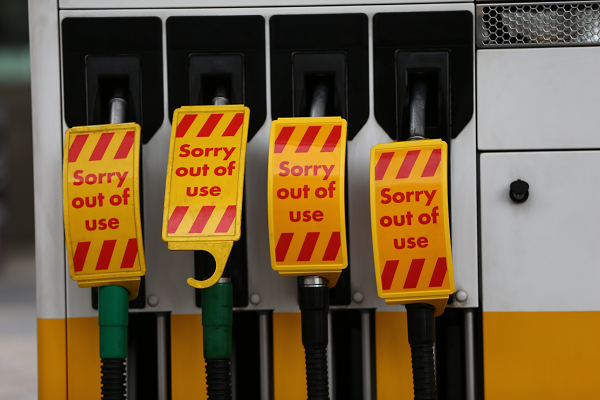 Within in days 90% of petrol stations across the UK are running dry of petrol and diesel and the Environment Secretary has confirmed there are “no plans” to get the army to help with fuel deliveries.

Eustice said, “We’ve no plans at the moment to bring in the army to actually do driving.”

He added, “But we always have a Civil Contingencies section within the army on standby – but we’re not jumping to that necessarily at the moment.”

He said the government’s message to drivers to stop “panic-buying.”

He said, “The most important thing is that people buy petrol as they normally would.

“There isn’t a shortage. There have been some shortages of HGV drivers getting petrol to forecourts but actually that is quite limited.”

The RAC warned on Monday that every forecourt across the UK now needs to re-stock at the same time as a result of drivers panic buying which will put “unbelievable pressure” on the supply chain.

Simon Williams, RAC fuel spokesman said, “We urge the government to do everything in its power to plug the gaps in the supply chain and keep deliveries moving normally.

“But as so many drivers filled up over the weekend, there should be less overall demand as long as fuel makes its way back on to forecourts in the next few days.”

Panic buyers have also contributed to pump prices, which is going to be a “pretty bleak picture for drivers.”