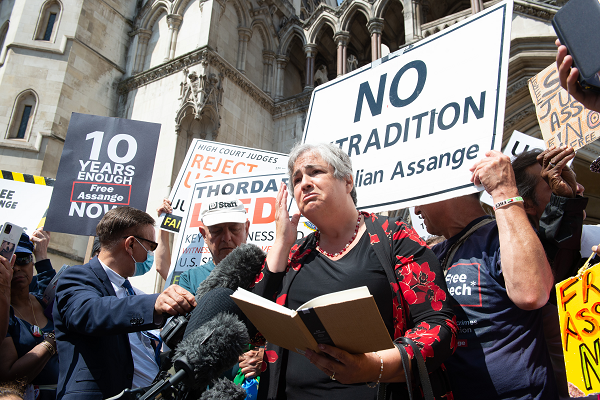 A court has been told at an extradition hearing the CIA were discussing plans to poison of kidnap Julian Assange from the Ecuadorian embassy in London.

US intelligence and a private security company spied extensively on Assange who is the co-founder of WikiLeaks.

The court was given evidence by a former employee of a Spanish security company, UC Global who detailed the spying operation against Assange.

American spies even plotted to obtain a babies nappy which had been taken to the embassy according to a witness who gave a written statement to the court.

The founder and director of UC Global, David Morales, said that “the Americans” were going to try an establish a paternity, but this was foiled when the mother was informed.

The former UC Global employee was granted anonymity as they fear Morales and anyone else connected to him could be under real threat of harm.

Mark Summers QC told the hearing at the Old Bailey in London on Wednesday details of the the written evidence.

Assange who is a journalist is fighting extradition to the US over publishing evidence of US war crimes and abuse which has embarrassed the US government.

The US government’s QC, James Lewis to the Old Bailey on Tuesday that the evidence of the former employee is “wholly irrelevant.”

One witness who gave evidence said the security firm only had meager contracts in the beginning which was to protect the daughter of the country’s president and the London embassy.

Morales attended a security fair in Las Vegas and was awarded a contract  with Las Vegas Sands which is owned by billionaire Sheldon Anderson, who is also a friend of the former President of the USA, Donald Trump.

Morales went back to Jerez in Spain and told UC Global, “We will be playing in the big league.”

The witness said that Morales said the company has now entered “the dark side,” which allegedly would mean the security firm would work with the US authorities.

Trump was now in power in 2017 and Morales made frequent trips to the US with recorded data, the witness said.

The witness said, Morales “showed at times a real obsession in relation to monitoring the lawyers because our American friends were requesting it.”

Another witness who is an IT expert and also worked for UC Global said that Morales spoke about going to the “dark side.”

He was then tasked with installing cameras at the London embassy which recorded audio, which should also be able to livestream so the “friends in the US” can access the embassy in real time, which alarmed the employee.

The witness refused to livestream the cameras and said that it is illegal.

Summers read out to the court, “Obviously the document must have been supplied by a third party, which the witness expects was US intelligence.”

The witness said he recalls the American contacts had become nervous when Assange was almost about to secure a diplomatic Ecuadorian passport and that more “extreme measures” need to be deployed against those who visit the WikiLeaks co-founder.

The court was told, “There was a suggestion that the door of the embassy would be left open allowing people to enter from the outside and kidnap or poison Assange.”