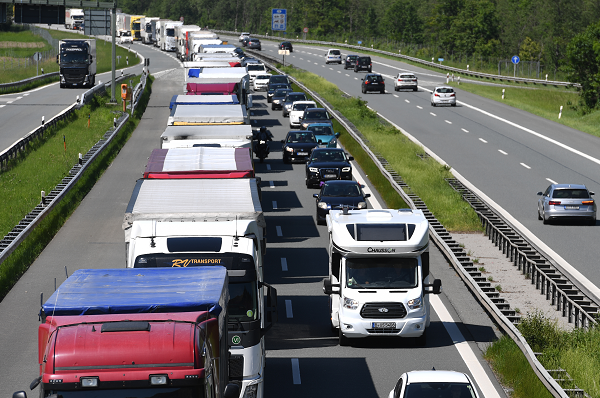 Business groups are “frustrated” after the government are refusing to loosen immigration rules which would help to ease the supply chain crisis.

The Business Secretary Kwasi Kwarteng has told companies to hire British workers instead particularly in the haulage sector where there is around 100,000 shortfall in lorry drivers.

Brexit and the pandemic are to blame and EU HGV drivers require a visa to work in the UK, but lorry drivers do not qualify as they are not defined as skilled workers.

During the start of the pandemic thousands of EU lorry drivers returned back to their home countries and have not returned.

As a result of the lockdowns in 2020 and 2021 there was a suspension of people being allowed to learn to drive and having their HGV tests which has resulted in a backlog of thousands of drivers.

Logistics UK and the British Retail Consortium wrote to the Business Secretary asking to provide temporary visa’s to EU drivers.

Kwarteng said that HGV drivers are not skilled enough to meet the British visa requirements and companies should recruit Brits and train them up, according to Sky News.

The Business Secretary said, “The government recognise that the UK labour market has changed dramatically due to the economic impacts and measures necessary to tackle Covid-19, and I realise that by adding HGV drivers to the shortage occupation list, this could provide a short-term, temporary solution.

“However, many UK-based workers now face an uncertain future and need to find new employment opportunities.

“I am sure you would agree on the importance of utilising the strength of our domestic workforce, and how our migration policies need to be considered alongside our strategies to ensure UK-based workers are better able to secure decent employment opportunities.”

Alex Veitch, general manager of public policy at Logistics UK said, “Logistics UK is frustrated with the government’s decision to reject the logistics industry’s calls for temporary visas to be made available for EU HGV drivers as a short-term solution while new domestic drivers are recruited, trained and tested.

“While these new domestic drivers are trained and qualify into the workforce, which can take up to nine months, and DVSA works through its backlog of outstanding HGV driver tests – which we estimate could take until early 2022 – temporary visas made available for European workers would help to overcome the current supply chain problems experienced across the country.

“The industry needs drivers now, and we have been urging the government to replicate its temporary visa scheme, introduced for agricultural workers, for logistics to keep trucks and vans moving in the short term.”