HomeNewsBusinessFarmers could be forced to destroy over 80,000 pigs due to ‘post-Brexit shortage of butchers’

Farmers could be forced to destroy over 80,000 pigs due to ‘post-Brexit shortage of butchers’ 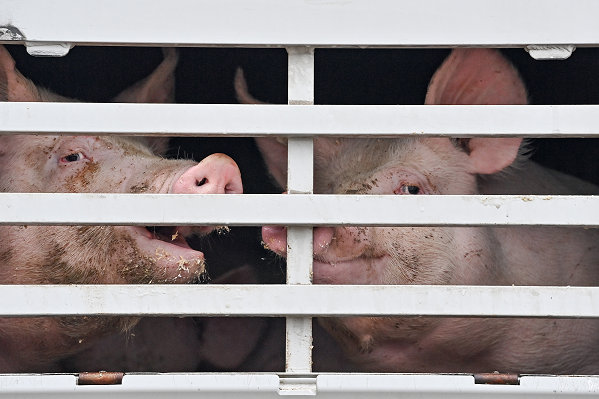 Farmers could be forced to destroy over 80,000 pigs due to ‘post-Brexit shortage of butchers’

Pig farmers could be forced to destroy their live stock as there is a shortage of post-Brexit butchers to work in slaughterhouses.

Foreigners are not allowed to enter the UK as Butchers is not on the list of “Shortage Occupations” where as what the government deems to be a “skilled worker” can obtain a work visa more easily.

Figures in the farming industry have said the exodus of EU workers has led to a “crisis” for pig farmers who may have to kill around 85,000 pigs.

A spokesperson for the British Meat Processors Association said they did not support a return to free movement, but they are urging the government to “manage” an immigration policy.

NPA chief executive Zoe Davies told the BBC’s Today programme, “The issue is that because, for whatever reason, a lot of workers have left processing plants and gone home because a lot of them are eastern European.

“The abbatoirs themselves cannot process the number of pigs that we supply them with on a weekly basis.

“So for the last six to eight weeks, all of the major processors have been cutting their kills by up to 25%, which is leading to pigs being kept on farms for far longer than they should be. And that is leading to an absolute crisis for us on the pig side.”

Davies warned the nature of farming is that the process cannot be slowed down because of a lack of staff, as animals will still be coming through the system.

Davies said, “Even if we stopped serving sows now – and that means mating them – it will take 10 to 11 months before the pigs stop coming.

“So you’re getting people in increasingly desperate situations.

“They are getting into debt.

“They’re getting very stressed out. And we’re now starting to head towards a situation where healthy animals may well need to be destroyed.”

A spokesperson for the government said, “We want to see employers make long-term investments in the UK domestic workforce instead of relying on labour from abroad.

“The Government encourages all sectors to make employment more attractive to UK domestic workers through training, careers options and wage increases and to invest in increased automation technology.”